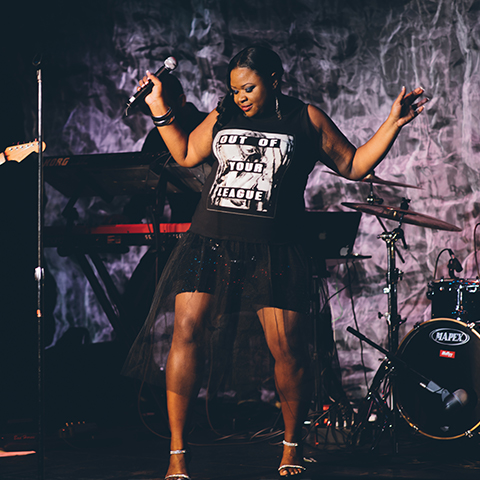 CeCe Teneal & Soul Kamotion has been captivating the globe with original, live music for more than 16 years. Their blend of blues, soul and roots music uplifts and inspires audiences with messages of hope, love and the belief that anything possible. They pride themselves on providing incredible live music experiences that transcend cultural and generational barriers.

The funkiest musicians to ever touch the stage, Soul Kamotion was founded by CeCe Teneal (Lead Singer), Chris Baptiste (Keys & MD), and Terrell Kimble (Bass). They have, as their song 90 Mph suggests, one gear – high energy. CeCe Teneal is an award-winning, undeniable talent who both critics and fans call “a musical force to be reckoned with,” and her achievements in the industry over the past decade are certainly a testament to that view.

The band’s debut live album, “#5or5000”, is a captivating, energetic and entertaining blend of songs that catapult you to a place where you just can’t hold back. It’s funky and fun, addressing all stages of love and living our true life. It’s enchanting yet powerful, encouraging us to move and groove on the dance floor and to embrace life. It’s faith-filled, purposeful and reflective when reminding us to appreciate our blessings, not take love for granted, and why we sometimes feel alone even when we’re in a relationship. It’s sassy and authentic when talking about the dangers of love, conquering each day and doing your own thing.

The album’s first single, “What I’d Do To Get Your Love Back” was originally written by CeCe’s mom, international blues singer Yvonne Jackson, and when the band listened to it, the words took on a whole new meaning. The song is an opportunity to reflect on what that moment would be like to get someone’s love back for just one day – a parent, sibling, friend or love interest. We’ve all been there.

In 2019, Soul Kamotion was awarded the Independent Music Award for Best Funk, Soul, Fusion song for "Danger". “#5or5000” reflects CeCe Teneal & Soul Kamotion’s mission of giving the same show and a hundred percent of themselves, whether there are five or five thousand people in the audience. This band Is a well-primed musical force and prepared to spread their message on a global scale.